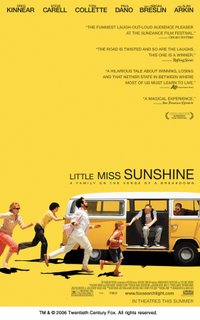 So here’s a little something non-stamping related since I have no cards to show today. We went to see Little Miss Sunshine this past weekend and I have never laughed out loud in a movie theatre as much as I did during this movie. Usually, I’m a quiet and respectful movie-goer… but this one is just too funny! Plus… we sat next to the loudest laugher ever… even if I was laughing out loud… his guffaws were definitely overshadowing my little giggles. Don’t you always get to be the lucky one to sit down next to one of these people!? LOL!

I loved this movie because it’s about a dysfunctional family each pursuing different dreams but supporting each other in those dreams (in a very odd way). The movie is full of ups and downs, laughter and sadness…. yes… I did shed one little tear. Now this is not a movie to take your little kiddos to… it is rated R for language. And I’m no movie reviewer so I copied this from the internet:

“The Hoover family is laid out before our eyes, each with their own introduction in the opening minutes of the film. 7-year old Olive (Abigail Breslin) studies the tapes of beauty pageants in preparation of her dream. Richard (Greg Kinnear) is developing a new 9-step ladder to success which he preaches to the family on every possible occasion. Sheryl (Toni Collette) is a “pro-honesty” mother not afraid of letting little Olive hear the tale of Uncle Frank’s (Steve Carell) suicide attempt over his failure to win the love of one of his male students. Foul-mouthed Grandpa (Alan Arkin) was thrown out of his retirement home for snorting heroin and teenage son, Dwayne (Paul Dano) has taken a vow of silence until he gets into the Air Force Academy, but mostly because he just hates his family.

In the middle of all this comes word that Olive has been chosen to compete in the Little Miss Sunshine competition when a technicality gives her the crown in the previous qualifier. Richard is thrilled to see Olive realize her dream, partly because it fits his mantra of “winners” over “losers”, but financial concerns make a flight from New Mexico to California impossible. With Frank under suicide watch and Grandpa taking duties as pageant trainer, the Hoovers all hop into their VW bus for a three-day trip. To say it all goes down smoothly is to say you’ve never seen a story like this before.”

I’d love to hear what you think of the movie if you decide to see it… or maybe you’ve already seen it! 🙂